While orchestrating our move to Paris, I relied heavily on blogs and other online resources to figure out what to do and how to do it. Unfortunately, I discovered that info can be pretty limited, so I decided to write a few informational posts detailing what I’ve learned. Apologies if these aren’t as interesting to casual readers, but I hope they’ll be useful to others making the move in the future!

Moving to France sounds glamorous – and it is! – but it’s definitely not for the faint-hearted. The stereotype is that the French love bureaucracy, and although I’ve never had to deal with immigration anywhere else, that certainly seems to be true from my experience. Living in France for longer than three months – the maximum allowed on a tourist visa – requires beaucoup de paperwork. But while the stereotype of bureaucracy-loving French government workers may be true, I have to say, everyone I encountered throughout the process was extremely friendly, which is not exactly stereotypically French.

If you’re embarking on this journey, first of all: felicitations! France is wonderful, and living abroad is a great adventure. But getting there is not easy. I read everything I could find online ahead of our visa appointments but quickly figured out that there’s no centralized checklist for How to Acquire a French Long-Stay Visa (not even on the official consulate website), so this post is intended to be Everything I Wish I’d Known Eight Months Ago. Because, yes, our first tentative steps toward French residency started back in November 2017. And by that point, we were already behind (but more on that in a moment).

First, a quick overview of the process. Once the call of croissants has become incessant enough that you’ve made the bold decision to move, the first thing to do is schedule a visa appointment with the French consulate nearest you (ours was in Boston). Before your appointment, you will fill out a visa application and compile a dossier of supporting documents to bring with you. When you go to the appointment, the consulate will review everything, have you pay a fee, and start the process of granting your visa. It will probably take a few weeks after the appointment before you can pick up your visa, but once you have it, you’re ready to hop on a plane! That’s what I’m calling Part I of the process: the before-France part.

Part II happens once you’re in France. First, as soon as you can upon arrival, you’ll need to mail a form establishing your residency to OFII, the French immigration office. They’ll later send you a letter assigning you an appointment and asking you to compile a few more materials, including paying another fee. You’ll bring all the materials to your OFII appointment, which you will leave (hopefully!) with a totally-valid visa for the full length of your stay. Before you have that OFII-approved visa, you’re technically only allowed in France (or anywhere in the EU/Schengen area) for up to three months, as a tourist.

Easy, right? Well, as the French say, it was pas terrible, but it’s certainly not fun. But let’s dive on in to the details.

Scheduling your visa appointment is theoretically very straightforward—we were able to do it online on the French consulate’s Boston office website, and you don’t need to have completed your application before making an appointment. However: as a word of warning, appointments can book up months in advance! Colin and I were hoping to leave for France in mid-January, so we waited until November to schedule our appointments, based on information on the website that says you can’t apply more than two months before your departure date. THAT WAS THE WRONG STRATEGY. We didn’t realize that we could get an appointment before filling out an application, so we’d waited too long and the first available appointments weren’t until January 12th. Adding on the three weeks the consulate says it will take to get your visa, that meant we couldn’t book plane tickets for before February 3rd. That was problematic for two reasons: (1) we had to move out of our Cambridge apartment by January 31st, and (2) we were going to be subject to tax penalties for not having U.S. health insurance in 2018 if we didn’t skedaddle out of the country. (There was an exemption if you were out of the country for more than 330 days.) Hence, our last minute, totally impractical London trip.

As fun as London was, I suggest you make things easy on yourself and just schedule an appointment as soon as you know you’re going to be moving to France.

Once you’ve secured an appointment, the next thing to work on is your application. The questions are pretty standard stuff: demographic information, what you’ll be doing in France, where you’ll be staying, how you’ll be supporting yourself financially. We found the website to be a little clunky (for example, we were never able to save our work and return to it later, and the English translation of the questions wasn’t always great). After you’ve answered all the questions, the website will generate a PDF (en français), which you’ll need to print and bring to your visa appointment.

I will say that we weren’t 100% confident we filled ours out correctly. Some of our uncertainty arose because Colin’s situation is a little unusual (hosted by a French institution but still receiving his salary from an American one), and some because we just didn’t understand the answer choices. We decided to try emailing the generic “contact us” link on the consulate website (the phone number never got us to a real person), and we were pleasantly surprised when a visa officer emailed back. His answers were helpful but not always perfectly clear, so in the end we gave it our best shot and went in for our appointments with fingers crossed.

The most nerve-wracking part of the whole process was figuring out what to bring to our appointments. The consulate website offered a short list of required supporting documents: our completed application forms, our passports, one passport photo each, proof of our residence in the consular jurisdiction (e.g., driver’s license, lease, or utility bill), our marriage certificate, proof of Colin’s “higher education qualification” (i.e., proof that he earned his PhD), and the convention d’accueil, which is the invitation letter from Colin’s French host institution. Simple enough. But elsewhere on the website I saw a slightly different list, which included extra copies of our passport identity pages, extra copies of the convention d’accueil, and OFII residence forms, which we would need once we got to France.

That’s when I started reading everything I could about other people’s experiences applying for French visas. Instead of allaying my fears, this actually made my anxiety worse. Everyone seemed to have brought more than what the consulate suggested, but they all brought something different! The sorts of things they brought ranged from birth certificates to bank statements to immunization records to carefully handwritten letters vowing not to work in France (for accompanying spouses like me). After calling Colin in a moment of panic, I accepted that dossier compilation would be my full-time job for the next few days before our appointments, and then I got to work.

The one thing that seemed crystal clear from reading about others’ experiences was that the French have a very deep respect for paperwork. Thus, my strategy became: let’s bury them in documents. I ended up including in our dossiers at least one copy of just about every document someone had mentioned bringing. Where some people said they brought two copies and others said they brought three, I printed three. Because we each had separate appointments, I printed two sets of everything, plus a third to take with us to France, just in case. That’s how we ended up with this: 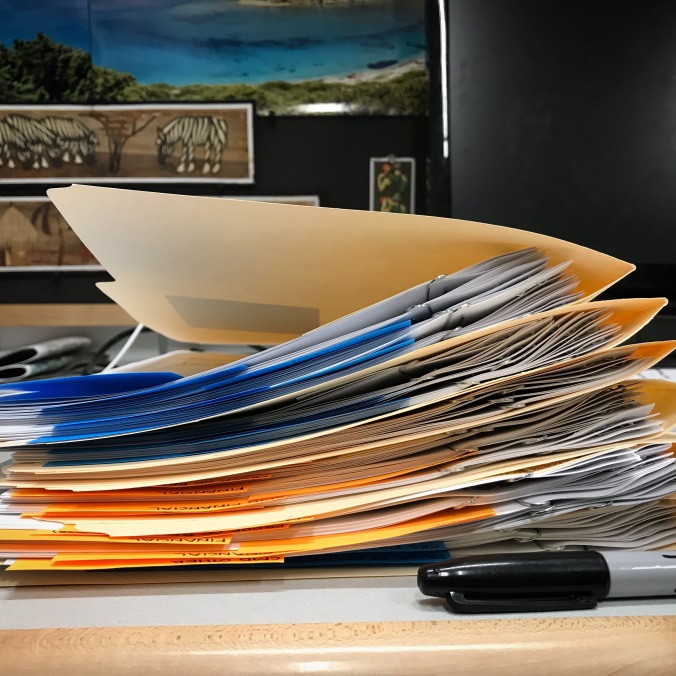 My stomach was doing some serious gymnastics on the morning of our appointments. We showed up more than 30 minutes early based on one account I had read online, but since our appointments were early in the day, we ended up being the first people there when the office opened, and they took us on a first-come, first-served basis. Despite having separate appointments scheduled (the website was super clear that each passport holder needed a separate appointment), the visa officer talked to both Colin and me at the same time. The office was just a single room with some chairs in the back where other applicants were waiting. So, yeah, it was a little strange to be talking to the officer about your life plans in front of a dozen other people, but that did make it less intimidating.

The officer (the same guy who had responded to our emails!) seemed suitably impressed by our binders of documents. He was also leaving for a family vacation to Disney World the next day, so maybe that explains his good mood? But he just rifled through our binders and took what he needed. In the end, he took at least one copy of most of what we had brought, with the exception of my financial documents (he just cared about Colin’s, and only his most recent bank statement), our immunization records, our airplane tickets, and the letter promising that I wouldn’t work.

Our one big problem was that we did not have the original convention d’accueil. It had seemingly gotten lost in the mail between Paris and Boston, despite having been sent via registered mail weeks prior. All we had was a scanned copy. Until we had the original, the officer informed us, we wouldn’t be getting our visas. He would move our applications through the system in the meantime, and we could just bring the original when we returned in a few weeks to pick up our visas—pas de problème, he said, with an air of Disney World optimism. Colin and I were less sure we’d be able to move mountains to get another version mailed from France in time, but goodness knows we’d try!

Anyway, once the officer had picked out the documents he needed, he took our fingerprints and had us pay the visa processing fee (it differs by type of visa, but ours was 99€ each). The whole thing was very quick—maybe 20 minutes? As a result of arriving early, we were out of there before our scheduled appointments were even supposed to have started!

Picking Up the Visa

Picking up our visas was by far the easiest part of the process. By some stroke of good luck, the original, thought-to-be-lost-in-the-mail convention d’accueil arrived while we were in London, so we just showed up at the consulate during visa-pickup hours, waited in the first-come, first-served line, handed over the convention d’accueil and proof of payment from our previous appointment, and watched with excitement as the officer (same guy again—now sporting a tan from his trip to Florida) affixed our visas to our passports. The visa is just a large sticker on an empty page, but it’s a sticker that meant we were on our way to Paris. We could almost smell those croissants!

Bleary-eyed, blurry selfie after an eight-hour red-eye flight to Paris. Our new home!

See Part II of this post, which explains the OFII process, here.

3 thoughts on “How to move to France: Part I”