Before we moved here, everyone told us how mild Paris winters would be. “It almost never snows,” said a friend who lived here five years ago. “It snowed about an inch one winter when we were there, and everyone went crazy!”

Imagine the Parisians’ delight, then, when it snowed all day Tuesday into Wednesday morning (and is snowing again now!). By some reports central Paris got six inches, more than they’ve had in 30 years, although it looked like closer to three to me. Kids were running around scraping snow off cars to throw at each other, and tiny snowmen appeared around the neighborhood. This little family was keeping watch over Notre Dame: 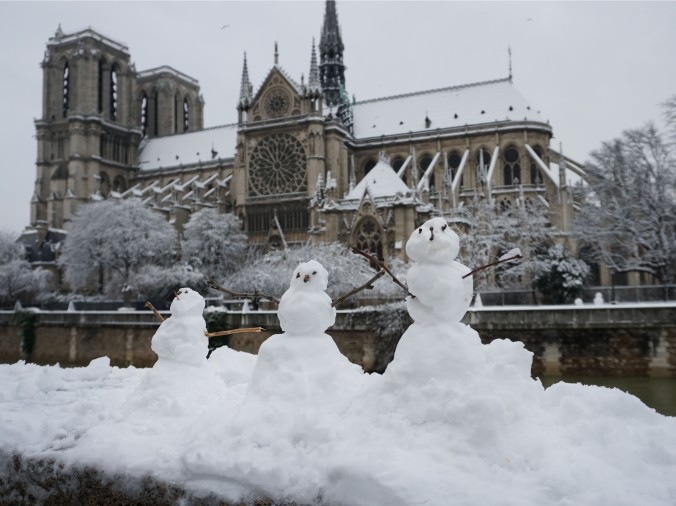 The snow was beautiful, but there were two problems. One: for the last couple months, Colin and I have been checking the weather in Paris and it’s been consistently in the 40s and 50s. That meant that when we packed, we failed to bring winter boots, thick sweaters, or warm scarves (fashionable scarves only, although I’ve got seven of those because, please, it’s Paris!). So we’re a little cold now that it’s decided to be 30 and snowy.

The second problem: no one here has snow shovels or salt, so the sidewalks are basically one giant skating rink. And we didn’t pack our ice skates, either.